Today we can observe a spectacular sky over Poland - says professor Krzysztof Markowicz from the Atmospheric Physics Department. Since the morning the Sun has been covered by a thick layer of Saharan desert dust. It looks as if the clouds are obscuring the Sun. Satellite images show, however, that over eastern Poland there is no cloud cover, but "something" that resembles smog is visible. The optical thickness this morning was about 0.8, which is very high and not seen in Poland more than once a year. The Angstrom exponent dropped to 0.3, indicating the presence of relatively large aerosol. Lidar data show that the dust layer extended from about 3 to 6 km. So there is no doubt - it is the 'desert' that is obscuring our Sun today. The naked eye can see that it is darker than usual. Precise measurements of the solar radiation reaching the Earth's surface indicate that there is significantly less of it (at 9 a.m. about 100 W/m2 or 20%). It can certainly be said that the influx of sand is exceptional. Importantly, the lack of cloud cover allows measurements that are not easy to make in our conditions. In Poland, sand inflows are usually recorded in humid air masses in which clouds develop. The presence of large amounts of sand causes a decrease in the energy coming from the Sun, which translates directly into smaller heat fluxes to the atmosphere and suppression of convection. Conditions for the development of storms from eastern Poland will therefore be weak, which cannot be said for the west of the country. There the forecast is very bad. But maybe the sand will weaken today's phenomena a bit. Especially since the size of meteo models does not take into account the presence of aerosol and may in this case overestimate the potential for storm development. 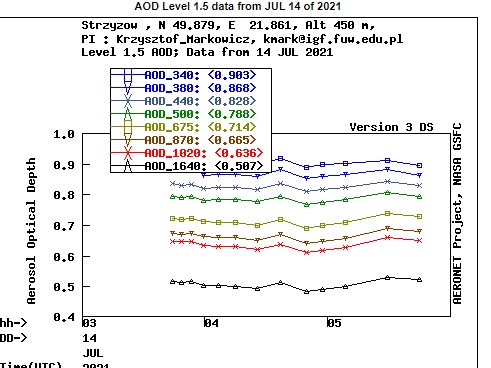