Mixed-phase clouds are composed of water in all three states. Two kinds of cloud particles, ice crystals and water droplets, are kept suspended in a turbulent flow of air and water vapor. These cloud particles grow in size due to the absorption of vapor from their surroundings. This category of clouds is very common around the globe and thus have a great influence on Earth’s climate. They influence the water cycle through precipitation and the Earth’s energy balance through their radiative properties, since the amount of sun radiation absorbed or reflected depends on the sizes of droplets and ice crystals.
Unfortunately to this day we are still unable to fully understand and predict the behavior of mixed-phase clouds. In particular, current models are unable to explain why mixed-phase clouds persist for days of even weeks, when the mixture of ice crystals and super-cooled droplets is inherently unstable (see Figure 1a). This and other discrepancies between cloud models and observations are strongly connected to the fact that modern computers are still not capable of simulating such complex systems with enough detail to capture all of their intricate mechanisms. Due to the limited resolution of cloud computational models, large groups of cloud particles are assumed to experiment the same average temperature and humidity. This contrasts greatly with reality, where heterogeneity is observed down to the centimeters (see Figure 1b).
In this research, we propose a micro-physical model to simulate the effects of atmospheric turbulence in the length scales where the detailed motions of air are not represented explicitly. We expect this approach allow us
significantly broaden our current knowledge about cloud systems, while having a great impact on the time evolution of particle sizes and consequently on our ability to understand, model and predict climate. In particular, we expect the model will achieve better representation of the observed micro-physical properties and stability of mixed-phase clouds. 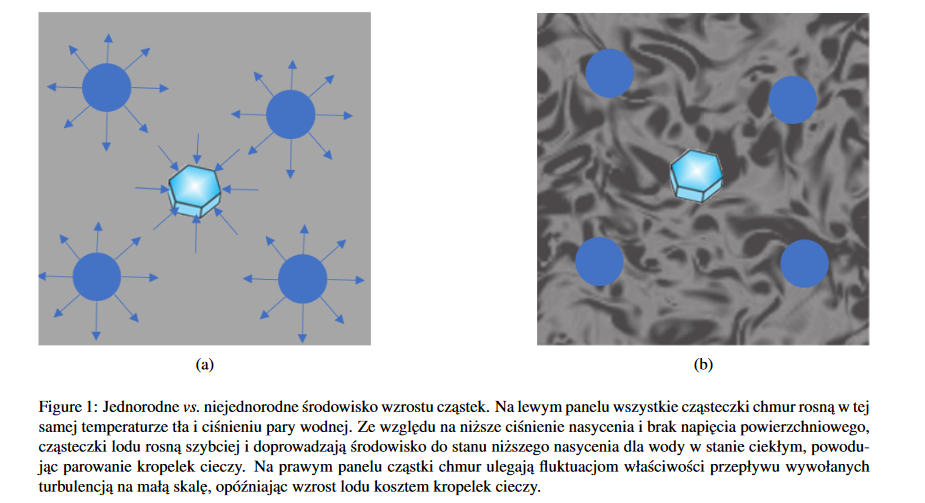 Figure 1: Homogeneous versus heterogeneous environment for particle growth. On the left panel all cloud particles are growing under the same background temperature and water vapor pressure. Because of the lower saturation pressure and the absence of surface tension, ice particles grow faster and bring the environment to a sub-saturation condition for liquid water, causing the liquid droplets to evaporate. On the right panel cloud particles experience fluctuations of flow properties induced by small-scale turbulence, delaying the growth of ice at the expense of liquid droplets.